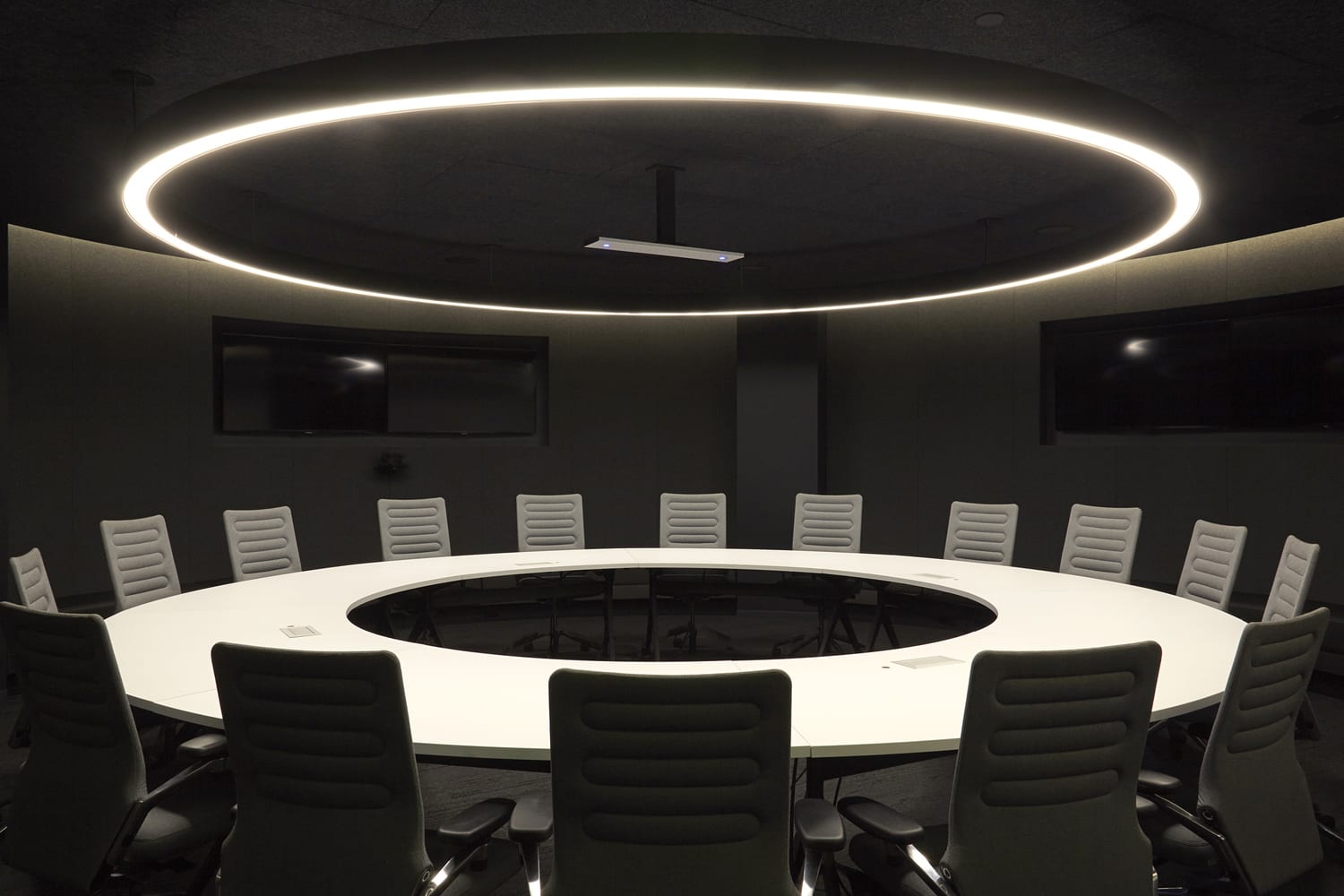 So what do you do with hundreds of million dollars of venture capital funding? Besides buying up your competitors, you enter the cool office interiors arms race and start fighting for the attention of the best tech talent on the planet, that’s what! Airbnb is well on its way to global domination of the world rent a room/rent a flat market, having only been founded in 2008! Since then it has helped over 9 million guests in more than 190 countries find accommodation. But what of it’s own home? The gleaming new office headquarters located on the corner of 8th and Brannan Street in San Francisco ? Well, with a little help from Architects Gensler, it’s just possible they have created one of the top ten coolest offices in tech… 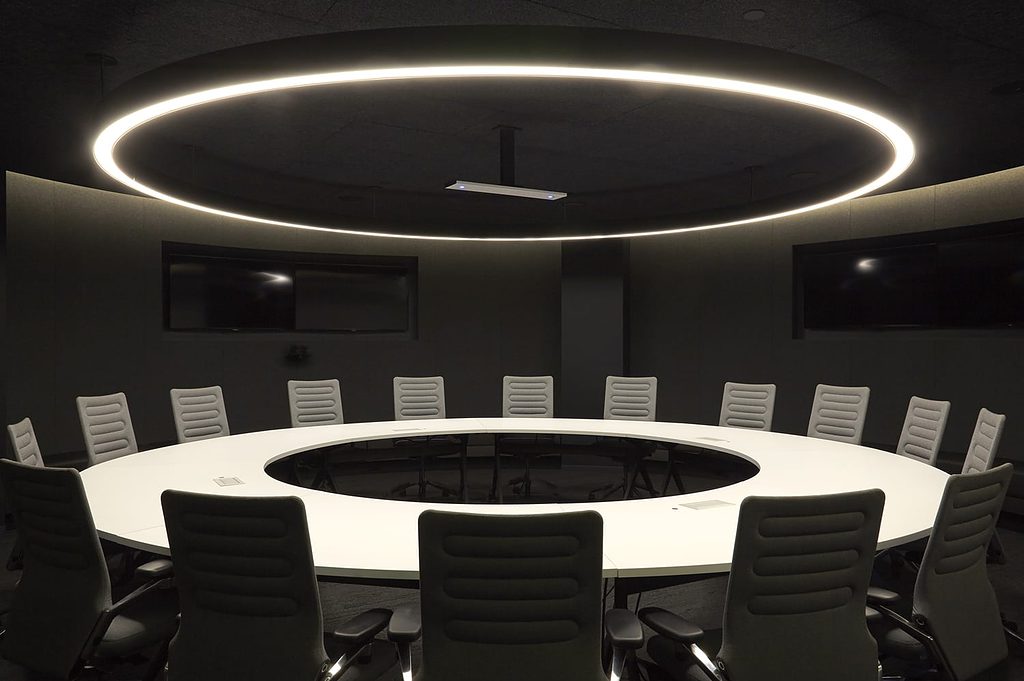 First off, let’s talk about the Doctor Strangelove boardroom, if you ever needed to show your  intention of world domination, this is it! It’s just oozes cool. It would be very difficult not to laugh “despicably” at the conclusion of a particularly fruitful meeting in this room. Unfortunately you would have to fill every one of the 16 seats for every meeting, it would just be strange with only a few of you round that thing, but maybe people in this office are used to having a lot of space given the office space is some 170,000 sq/foot and houses just 200 employees, which seems wonderfully extravagant to say the least. We were disappointed that the chairs hadn’t been fitted with a tipping mechanism, leading to a trap door, with a slide into a shark infested pool. But hey, there’s always phase 2! 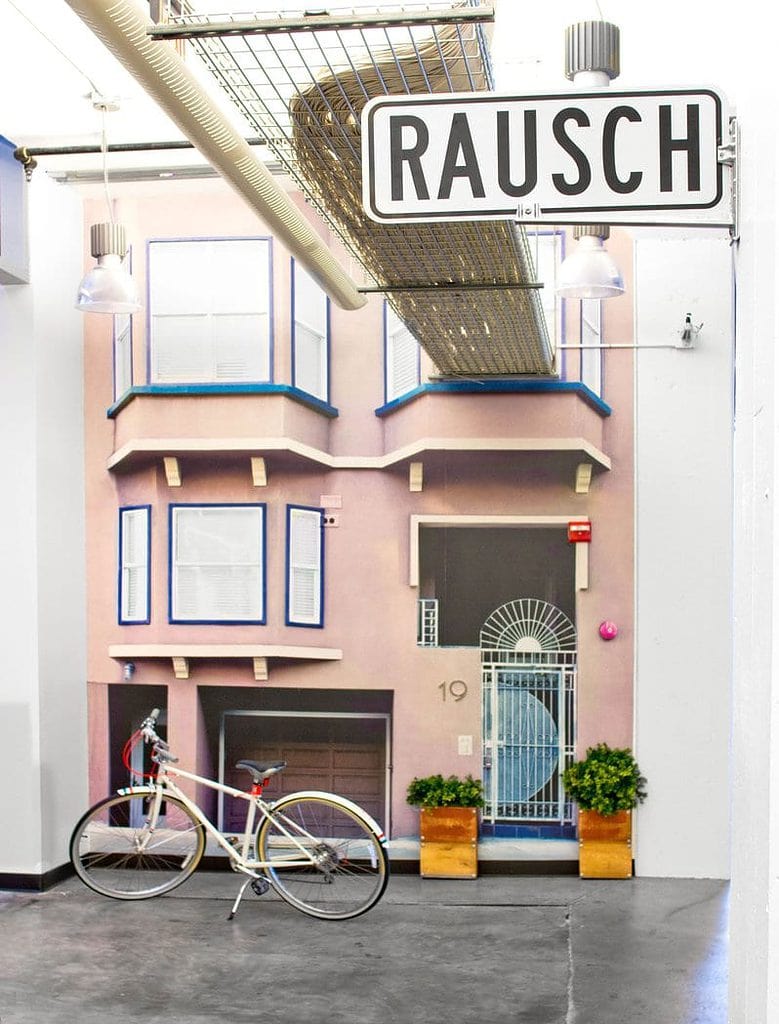 Don’t think the founders have forgotten where they come from, in fact they built an exact replica of their old apartment in Rausch Street where it all began… 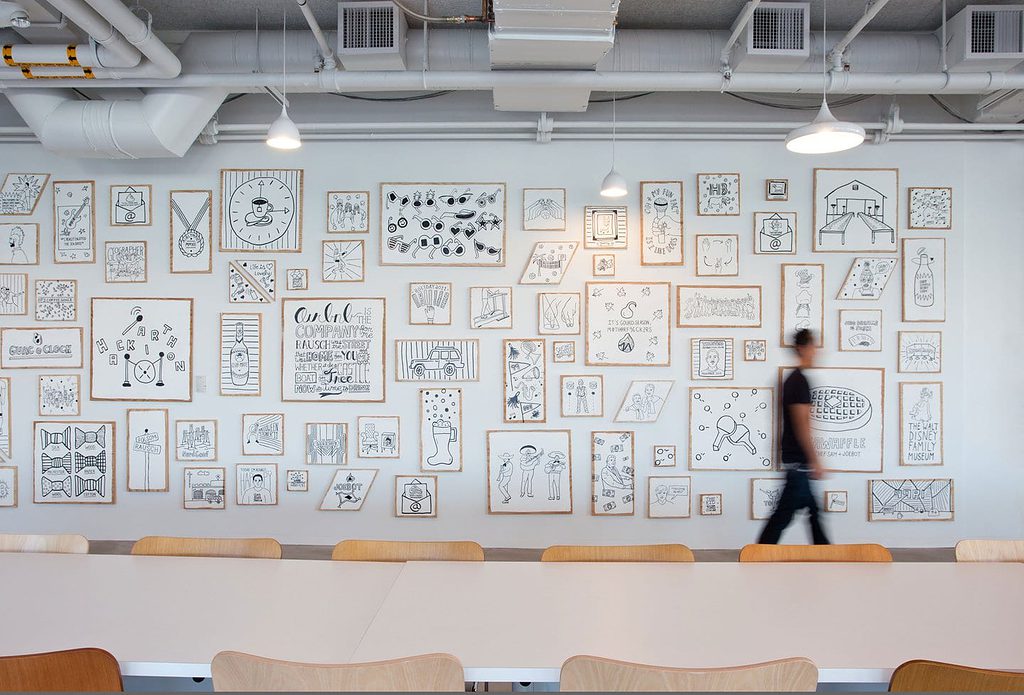 …and we are rather partial to the “culture wall” they have had built in the breakout area, to reflect their values in an attractive collage. I guess the subliminal “cultural message”s is very subtle though, note bow ties and weird glasses etc… I suppose they’re saying everyone is just a bit different here. Those crazy kids. Well whatever, it looks nice for sure. 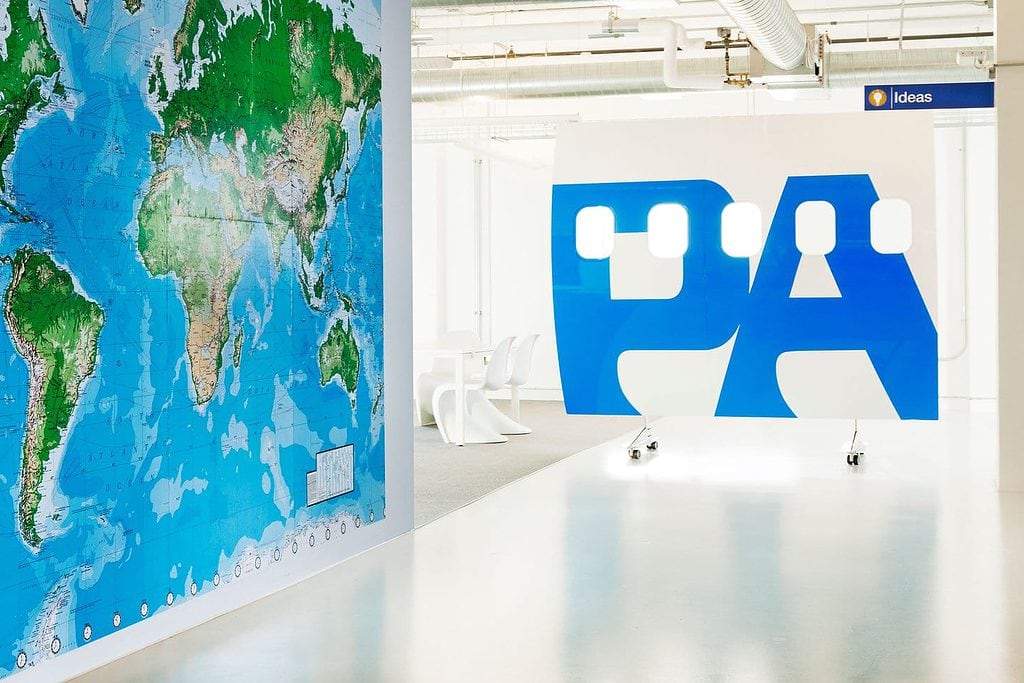 …and yes, we know the world map is a bit of a cliche for the global company plotting world domination. But how cool is this mobile partition, made to look like the side of a pan-am aircraft to compliment the map and pull it altogether in a relevant and clever  statement? 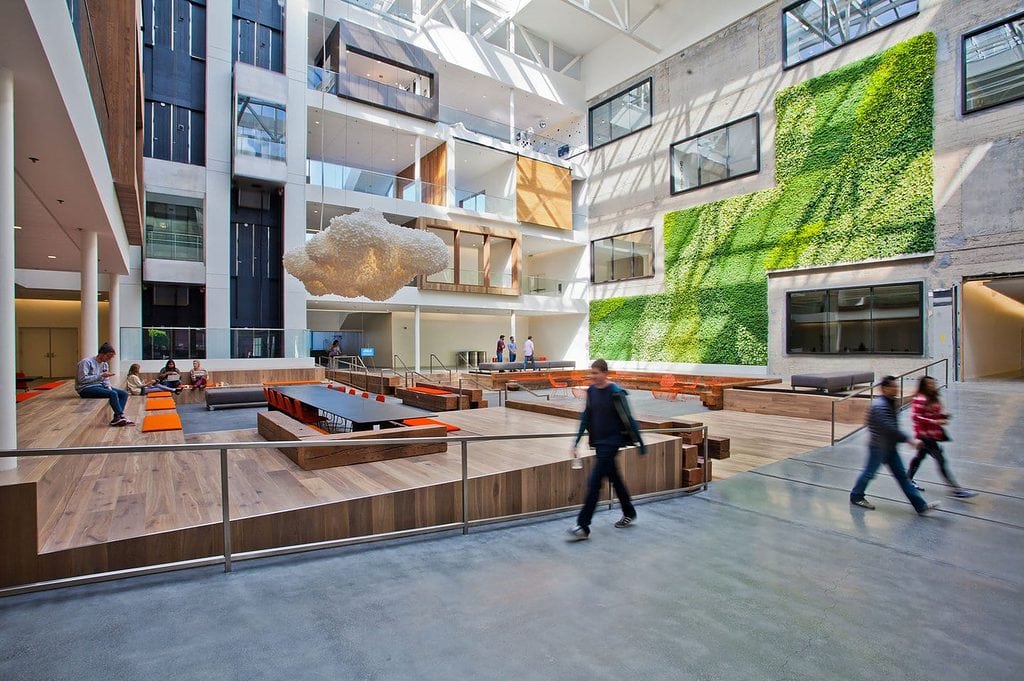 The central atrium is an impressive place to chill out, re-energise and have informal meetings. The space itself is a converted warehouse dating back from 1917. CEO Brian Chesky said of the central space “The first time we stepped into the atrium, we imagined looking up and seeing a cross section of the very homes that are featured on our site – immediately knowing, without seeing any logos or signs, that you were at Airbnb,”  Mmm…ok. You be the judge! 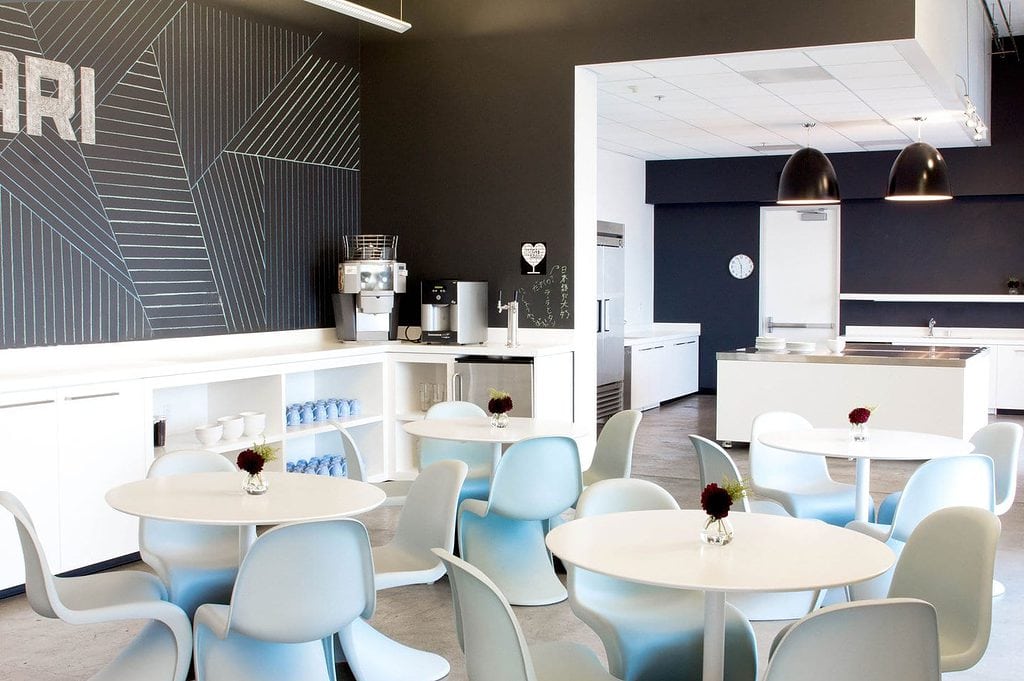 A nice looking breakout kitchen area….you can never have too many pantone chairs from Vitra it seems! We’ll pretend we can’t see the standard ceiling tiles. 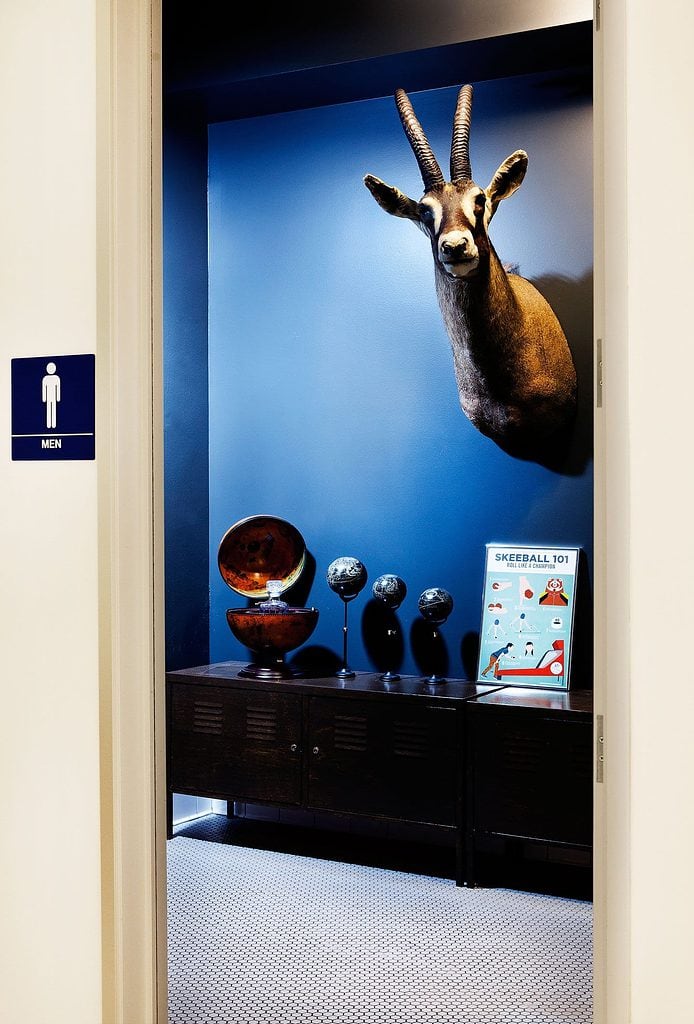 Who doesn’t have a antelope’s head (we think that’s what it is) in the male lavatories of their office? I’m not sure this is very politically correct, but I guess the alpha males who work in San Francisco for Airbnb hunt endangered animals for fun at weekends (besides plotting to end the world during work hours). Well that and playing Skeeball.

Aaaah, the old “what do we do with the bloody great white wall” problem. Stick polaroid pictures up of all the nice apartments on the website, mounted on blocks of wood. Problem solved! 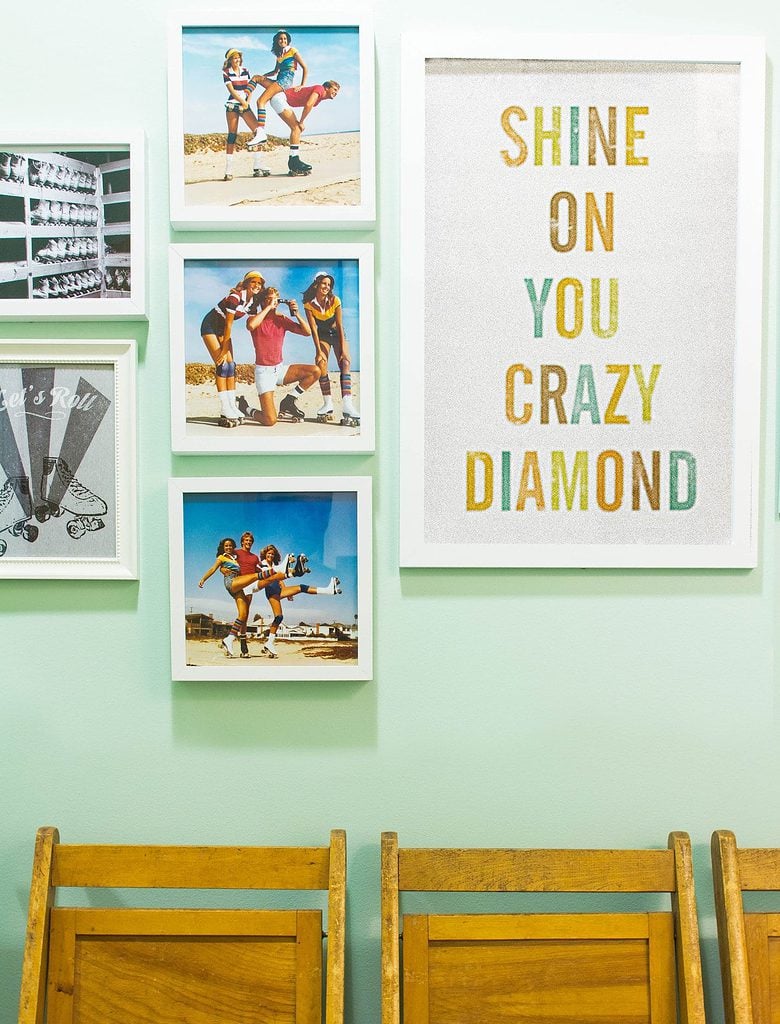 Go on, admit it, you too want something in your office that pays homage to Pink Floyd. “Shine On You Crazy Diamond” – Remember when you were young? You shone like the sun…. 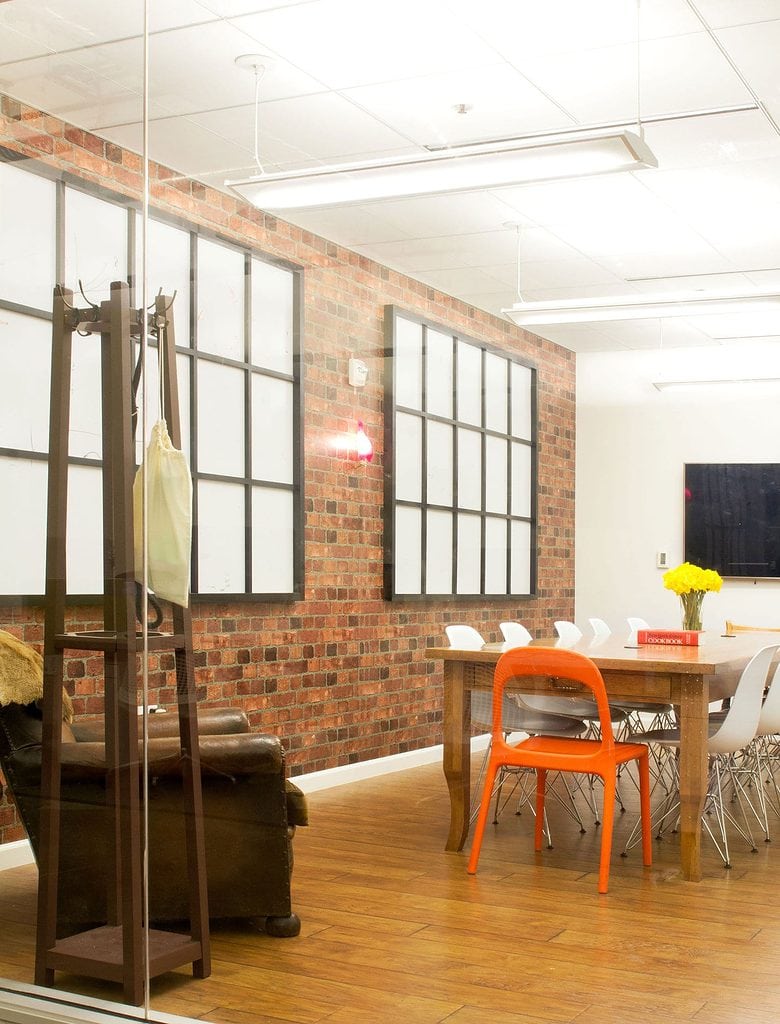 No windows in the meeting room? No matter, we’ll build something that makes it look like we have windows. 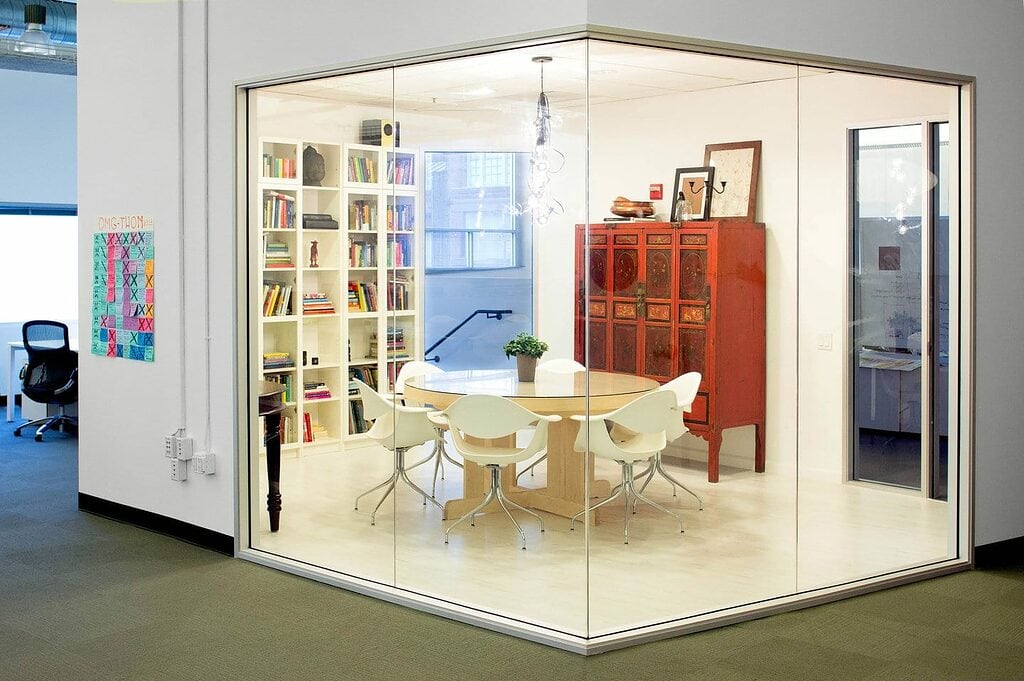 Don’t look at those strange switches on the left of the glass….I said don’t look! Damn, too late. 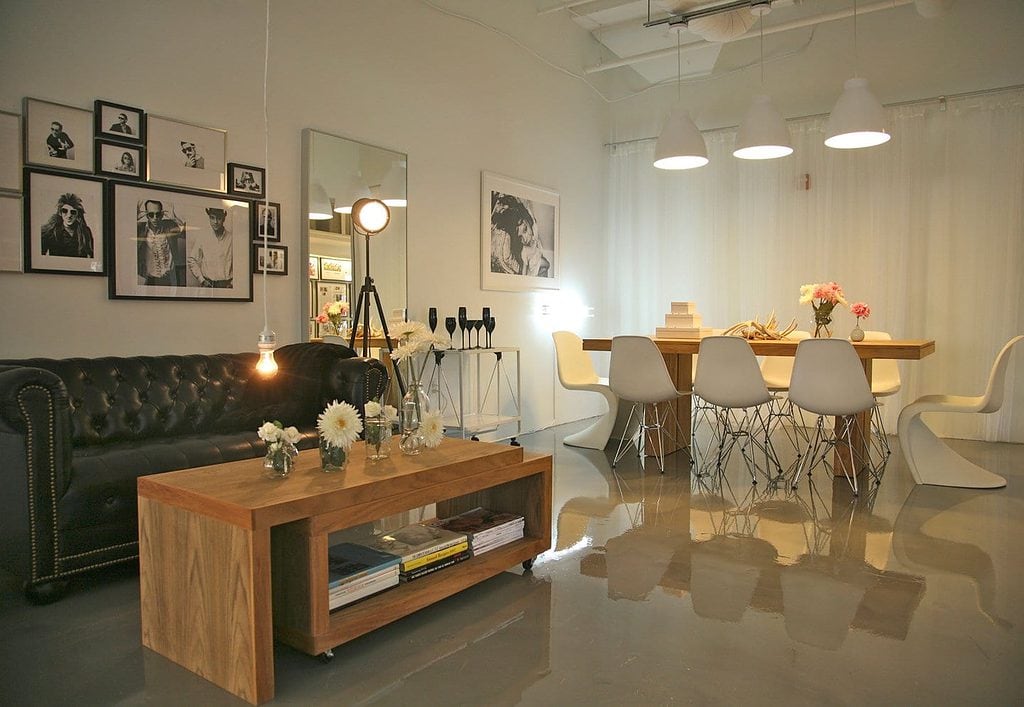 Oh we like this meeting room, one of the more successful ones. There are a lot of different meeting rooms that reflect the individual and unusual tastes of all their clients homes. Some work some don’t, but all are very personal and appeal to everyone in different ways. Eames and Pantone chairs mixed together? Shock horror. We suspect the low hanging bulb is keeping those plants happy. 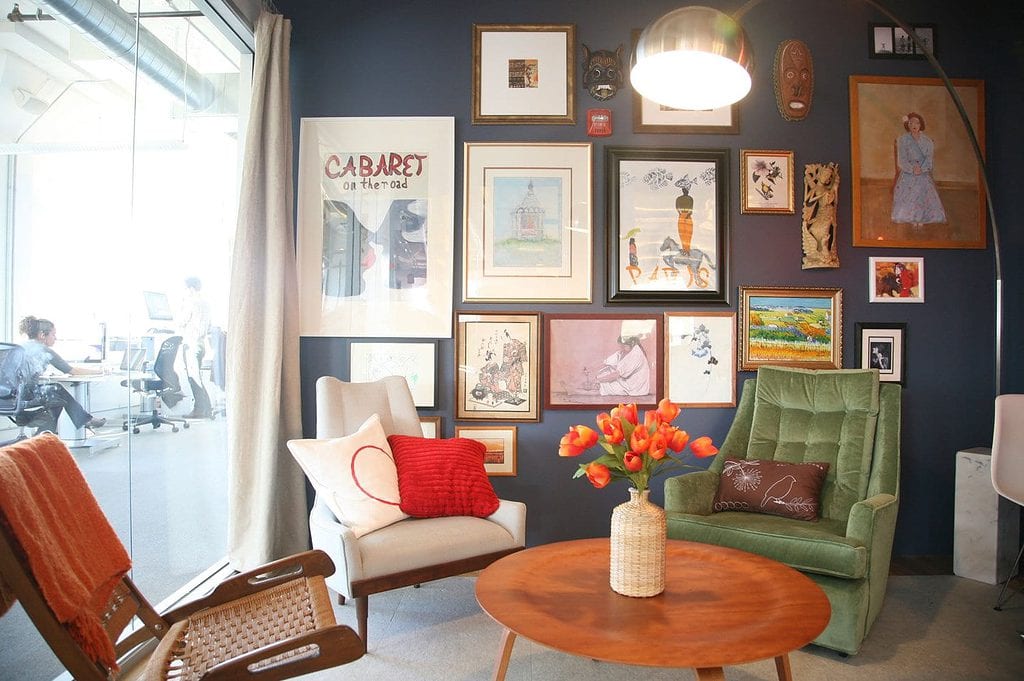 It’s very difficult to get this look right without tipping over into pretentious territory… if you imagine how hard someone has tried to make this space look like they’ve haven’t tried hard to make the space, it kind of makes the relaxing space less relaxing – but it’s fascinating to see and it’s a whole heap better than a space where no one makes any effort – which unfortunately seems to be more offices than their should be… Click our lick to see our top ten of cool office design

For a closer look at more pictures of the Airbnb offices, please click on the images below.  And if you have the budget and inclination to create some cool office interiors, please don’t hesitate to contact our london office. What do you think? Put your comments below.