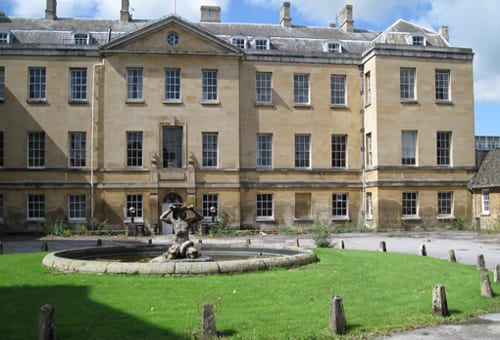 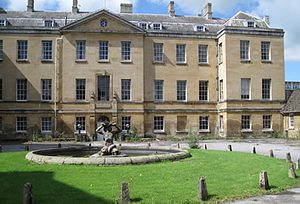 The refurbishment of the Radcliffe Infirmary building is well underway and expected to be completed this summer. It will house the Humanities Divisional Office, the Faculty of  Philosophy and the Philosophy and Theology Libraries. The building falls within the Radcliffe Observatory Quarter (ROQ), a project described as one of the most significant the University of Oxford has undertaken for more than a century.

During September last year the new £10m accommodation blocks for Somerville College were finished, the first completed buildings of the £500m master plan. Redevelopment of the 10-acre site also sees work progressing on a new mathematical and humanities building, a new school of government building and a health centre.

The fountain and statue of Triton have been removed from the front of the Radcliffe Infirmary for refurbishment. The statue was erected following public subscription in 1857 and forms part of Oxford’s history. Speaking of the project, Oxford University’s spokesman Matt Pickles said: “The historic Radcliffe Infirmary building with its statue of Triton forms one of the centrepieces of the Radcliffe Observatory Quarter development. The statue was removed so that repairs could be made and the fountain could be relined. It will return to its original location on the site [this] summer.”

Work on the site can be watched live via the webcam.