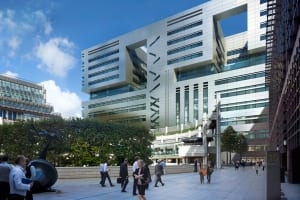 The Swiss bank, UBS, will move into a new 700,000 sq ft headquarters seeing the construction of one of the largest office buildings in the City of London. UBS and British Land, the property developer, have agreed a development at the Broadgate estate in London’s main financial district; creating the biggest ever pre-let in the City. British Land announced that the office building should be ready by the forth quarter of 2014. British Land and Blackstone, the co-owners, are already demolishing buildings on the site in preparation for the new London offices.

UBS is set to take the lease for around 18 years at a rent of £54.50 per sq ft, which will increase in line with inflation. The deal was first announced in 2010 but ironing out the details has taken a long time. The property industry has viewed this deal with interest as the unsettled economic environment has had a negative impact on the certainty of such plans; the law firm CMS Cameron McKenna pulled out of a similar deal.

Michael Burt, analyst at Espirito Santo, said: “While we had always viewed completion of the pre-let as a formality given that the building had effectively been designed to UBS’s bespoke requirements, it is still reassuring to see the transaction complete in light of CMS Cameron McKenna’s recent decision to defer a pre-let.”