Nestle, is one of the biggest office employers in Croydon, London and Croydon Council have made a number of moves to persuade the largest office occupier in its area to keep Nestle in the region. It was revealed in October 2010 that Nestle were considering moving some 2000 jobs outside of the borough. But the food giant will indeed be leaving the borough, its home since 1965, and relocate to BT’s former office space near Gatwick airport at 1 City Place in nearby Crawley. Nestle have taken the Gatwick Airport refurbished office building on a long-term lease and it looks like they will be in their new work space for many more new years as they invest in  a major office interior design and office fit out project. 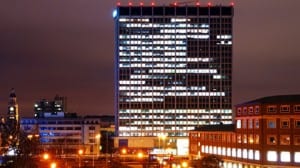 The total refurbished office space will be in the order of 130,000 sq/ft and Nestle will be relocating 2000 office jobs from their current headquarters in Croydon, London. Seen here right.