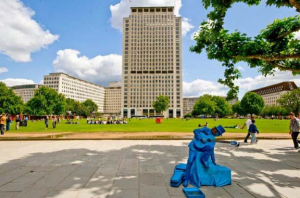 Squire and Partners have been appointed by Canary Wharf Group and Qatari Diar Real Estate Investment to plan the redevelopment of the Shell Centre site on London’s South Bank, providing new office space on one of the largest development sites in central London.

Squire and Partners replaced the original architects – Rogers Strick Harbour – as the plans were required to be more sympathetic to the surrounding area. The development is likely to have a mix of uses including office space, retail and residential space.

Shell‘s 27-storey headquarters will remain unchanged and will continue to be occupied by Shell. It is expected that Shell will take a pre-let of 210,000 sq ft in one of the new buildings to be constructed on the site.

An extensive public consultation process was started last month as the needs of the local community and prospective tenants have to be taken into account.

Canary Wharf Group and Qatari Diar Real Estate Investment were appointed as the developers last year and are expected to pay £150m each for the 999-year lease of the site.